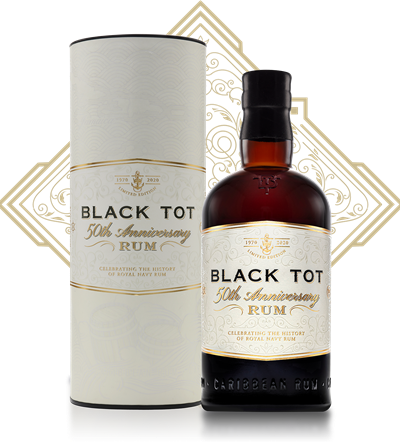 ''The British Navy were the original rum blenders, marrying together flavours from around the world to create something served to every sailor, every day. This bottling, celebrating the 50th anniversary of Black Tot Day, is a tribute to their original blend, bringing together some of the great lost rums of the past with the amazing modern distillates of today. Every cask used has played its part in making a rum that we believe people will want to drink every day.’' - Oliver Chilton, Head Blender

To celebrate the 50th Anniversary of Black Tot Day, we have created a commemorative limited edition Black Tot blend. In this release of just 5000 bottles, you’ll find a marriage of rums from the four cornerstones of the Royal Navy blend: Jamaica, Barbados, Guyana, and Trinidad.

Bottled at full Navy Issuing Strength, discover rums from demolished distilleries and ancient stills, and even the remnants of the historic Navy Rum blend itself.

This rum reflects our dedication to the art of blending. With a carefully-chosen balance of rums from across these countries and distilleries, as well as a nod to the last consignment of the Navy Rum blend, Black Tot 50th Anniversary Rum is a fitting tribute to Black Tot Day, with an incredible medley of flavours and origins.

Each year will see an evolution of the Black Tot blend, using the previous years’ rum as the base.

Black Tot 50th Anniversary Edition is a well-layered homage to some of the cornerstones of the Navy blend, showcasing a delicious medley of flavours and origins - from Guyana, Trinidad, Jamaica, Barbados and a Navy world blend. Below you will see the breakdown of our blend composition in percentage terms. We put enormous value on transparency, and so we are delighted to share our recipe with you.