Black Tot Days Around the World

For the British Royal Navy (and for most rum lovers everywhere) Black Tot Day refers to 31st July, 1970 - the day that the daily rum issue was brought to an end, and with it the end of one of the most unique and enduring rum blends ever created.

However, alcohol was not unique to the British Navy - in fact, almost every Naval force around the world would have at some point served a daily issue of alcohol to its crew . The reasons behind this daily booze allowance being first introduced were simple - not only was it a useful tool for keeping morale on board the ships, but it provided a much needed alternative to drinking water. What did these crews have against hydration you may wonder?! Well, in the absence of modern storage vessels, water would have been transported in wooden barrels. While wood may have provided a flavourful bonhomie when ageing spirits, water would fare less well - often spoiling in the barrel with algae and bacteria quickly propagating within. Alcohol was, quite literally, a solution to this problem.

As more stable shipping materials were developed however, the hydration issue became less and less of a justification. The tradition of the daily rum issue soon fell simply to morale, and was contended by the advent of both temperance and technology. One by one, Naval forces around the world ceased their booze ration, seen as a move towards a more modern era of warfare. Today it would be almost unthinkable to bring in any kind of daily morning alcohol routine into the armed services (Bloody Mary, anyone?).

While the term ‘Black Tot Day’ may be unique to the 1970 event with the British Navy, we think it’s an apt term for the death of this much-loved tradition, no matter where in the world it occurred. Here is a timeline of some of the Black Tot Days you may not have heard of before… 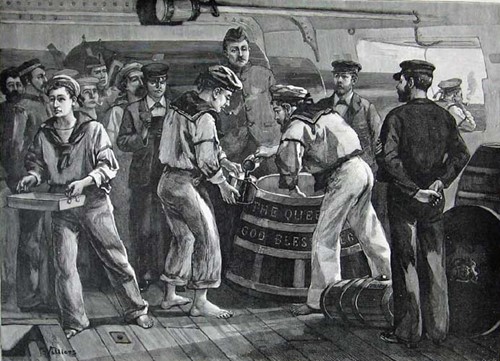 16th September, 1862 - All distilled spirits ordered to be removed from ships (except for medical provisions)

The United States Navy unsurprisingly started in a very similar fashion to the British Navy, with a daily half pint of spirits issued, followed by quickly reducing it to the 1 gill (142ml) per day once the effects of the alcohol on board were better understood.

The US Navy went through several stages of temperance before reaching full teetotalism - a level of abstention that even most modern Naval forces don’t attempt. What’s interesting to note is how the temperance beliefs throughout the country itself meant the US Navy would become the first major Naval force in the world to run a dry ship. Being so long ago, we have little records of the American ‘Black Tot Day’ or the crew’s response to it.

After the initial ban of distilled spirits in 1862 (note the British Navy would continue to issue rum for another 108 years after this date) there was still a provision for wine and beer to still be consumed at what was called a ‘wine mess’. However, this tradition too would be short-lived, with General Order 99 bringing an end to all consumption of alcohol in the Navy from 1st July 1914. With Prohibition across the country following on in 1920, it’s perhaps clear to see why rum-running became such a lucrative prospect in that part of the world…

For a full timeline on alcohol in the US Navy, click here.

For a country whose very foundation is intertwined with rum, it’s curious to note that the Australian Navy were never formally granted a daily rum ration (whether this made the recruitment more difficult, especially in Queensland, remains speculative at best). However as with all Naval traditions there was a workaround - Australians serving tours aboard British or New Zealand ships were allowed to partake in the daily tot with the rest of the crew, but even this was banned from 1921 (49 years before the British would end the tradition).

So why were the Australian Navy steered away from rum? Once again, the religion of temperance played a key role - Admiral Sir George King-Hall had been a commander in the British Royal Navy prior to helping establish the Australian fleet - he estimated that 75% of all court-martials he ordered were caused by rum, and decreed that Australia should have no part in it. He was later appointed as President of the Royal Naval Temperance Society.

On paper the British Navy wins the longest standing rum ration. Though the official daily ration was codified in 1731, we have references of rum being given out on ships as early as 1655 (after the battle of Jamaica). Though the tradition ended in 1970, it had been under scrutiny for decades and in its final Parliamentary debate, finally lost the vote on 28th July 1970.

After the vote, there were only three days left to make the most of the last rum rations. Fortunately this meant there was a fair amount of rum left over and put into flagons - the same rum that Elixir Distillers would later bottle to be enjoyed now in Black Tot Last Consignment. Interestingly, the cessation of the rum issue here in the UK was ultimately less puritanical than its Australian and American predecessors - by this era it was the technological advancements made throughout the fleet in the 20th Century that would ultimately justify its abolition.

Only one caveat was left in place - that the Queen or Admiral could still issue an order to ‘splice the mainbrace’, entitling the fleet to a tot of rum when marking a special state occasion.

You can read the transcripts from Parliament leading up to the final vote here.

Canada’s Royal Navy was officially established in 1910, and as such inherited the majority of the British Navy’s customs - rum included. Interestingly, some later references to the Canadian Navy blend cite that it was in fact Captain Morgan from… Waterloo, Ontario. If that sounds surprising, it’s worth looking at the backstory of the brand behind this familiar piratical figure. The brand was created by Canadian spirits company, Seagram in 1944 - shortly after they purchased the historic Long Pond distillery in Jamaica.

So were the Canadian Navy enjoying a funkier blend of Navy Rum than their British counterparts? Well, it’s likely that the initial supplies would have been sourced from the British Navy blend, though with Seagram’s based in Canada it would have certainly made more sense to buy local (note that Seagram’s blended rums from many parts of the world, including Guyana, Jamaica, and Puerto Rico, all of which may have found their way into the Canadian rum blend).

Take a glimpse of the Canadian Black Tot Day here.

And a possible iteration of Canadian Navy Rum here.

1st October, 1941 - Daily issue officially begins (with the formation of the NZ Navy) 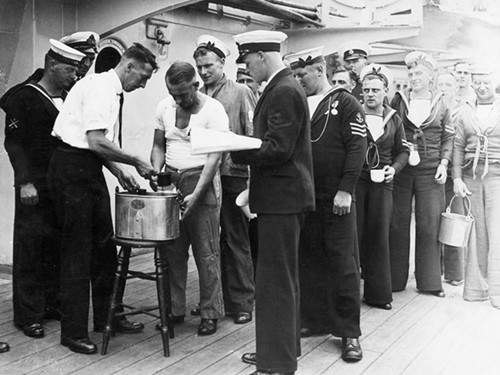 Rum Rations on the HMS Achilles, from NavyMuseum.co.nz

Operating on the basis of last in, last out, New Zealand holds claim to being the last of the Royal Navy forces to give up their rum ration. While the NZ Navy’s official start point is recorded as 1941, it should be noted that the New Zealand Naval Forces had been established as a division of the British Royal Navy since 1913, and so there certainly would have been rum available since at least that point.

Though initially thought to be largely supplied by Jamaica, New Zealand’s close proximity to Australia meant it would have certainly made sense to acquire rum from closer to home - no doubt leading to several Australian sailors keen to volunteer for tours with their kiwi counterparts whenever possible.

Being the most recent of all the Black Tot Days, we have a lot more recorded information on New Zealand Navy Rum - there’s even the records of a poll they conducted in the 1980s within the fleet’s senior ratings before they took a decision on ending the rum ration. Note that 64% of those polled believed the ration should continue, and only 13% believed it caused any discipline problems amongst the crew. Interestingly, 84% said it was ‘useful for getting parts and assistance when overseas’ suggesting that rum as a currency (or at very least a useful bartering tool) was still a consideration even by the 1980s.

Here’s a great article if you’d like to read more about New Zealand Navy Rum.

And here’s a great video highlighting some of the moments on NZ’s Black Tot Day filmed at HMNZS Tamaki (Naval Base) that gives you a great insight into what the sentiment was like at the time. Highlights include:

- Funeral march at the very start

Read on to find out all about the various component rums of the Black Tot Finest Caribbean blend, from three wonderful countries.