Canada’s Royal Navy was officially established in 1910, and as such inherited the majority of the British Navy’s customs - rum included. Interestingly, some later references to the Canadian Navy blend cite that it was in fact Captain Morgan from… Waterloo, Ontario. If that sounds surprising, it’s worth looking at the backstory of the brand behind this familiar piratical figure. The brand was created by Canadian spirits company, Seagram in 1944 - shortly after they purchased the historic Long Pond distillery in Jamaica.

So were the Canadian Navy enjoying a funkier blend of Navy Rum than their British counterparts? Well, it’s likely that the initial supplies would have been sourced from the British Navy blend, though with Seagram’s based in Canada it would have certainly made more sense to buy local (note that Seagram’s blended rums from many parts of the world, including Guyana, Jamaica, and Puerto Rico, all of which may have found their way into the Canadian rum blend).

Take a glimpse of the Canadian Black Tot Day here.

And a possible iteration of Canadian Navy Rum here.

Read on to find out all about the various component rums of the Black Tot Finest Caribbean blend, from three wonderful countries. 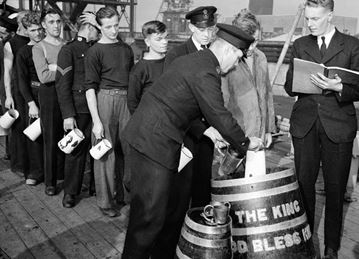 Black Tot Days Around the World

You may know of the British Navy's infamous 'Black Tot Day' on 31st July, 1970 - the day of their very last rum ration. But did other countries' naval forces have rum rations also? And if so, when did they cease? Click through to find out.