Hello all! I’m Edel, Brand Marketing Executive with Elixir Distillers and Black Tot, whisky fan and novice to the rum world. The purpose of these Black Tot Journal articles is to discuss my journey into rum. This is from the perspective of somebody completely new to the category and I’ll being writing in a (hopefully) engaging way that makes the spirit more accessible to others who are just discovering it too. We’re all in this together, so we may as well enjoy it!

In my last article, about colour and rum, I alluded to the fact that there are more helpful ways to learn about your rum than by simply looking at its colour – one of those ways is considering where the rum was produced. With that in mind, let’s look more closely at one of the significant rum producing regions: Guyana. Guyana is interesting from a Black Tot perspective, as it happens to be the country of origin of a significant portion of our Black Tot Finest Caribbean and Black Tot 50th Anniversary blends.

Guyanese rum is also often referred to as ‘Demerara’ rum – this gets its name from the fact that ‘Demerara’ was the historical name of part of the country area itself, long before it merged with Berbice and Essequibo to form ‘British Guiana’, which later got renamed as Guyana. It is also the name given to the famed Demerara River, alongside which many sugar plantations were located in the past. Today, the operations of Guyana’s only remaining rum distillery, Diamond Distillery (Demerara Distillers Ltd. or DDL for short) are situated on its banks. DDL are responsible for making rum used in many well-known rum brands we may be familiar with – including El Dorado and Pusser’s. Despite the association of the word ‘Demerara’ with sugar, the sugarcane/molasses from this region are not the main signifier of the ‘Demerara rum’ tag (more on that later).

Guyana has historically been one of the world’s main producers of sugarcane and molasses, leading to hundreds of rum distilleries being erected on the sites of these plantations in centuries past. As such, rum from the region played a significant part in the British naval rum blend (let us not forget the role of colonisation and its reach right up until Guyana’s independence in 1966). Guyanese rum was such a crucial part of the naval rum blend, that at Black Tot, we’ve termed it ‘The Heart of the Tot’ and released Black Tot Rare Old 40 Years Demerara Rum as a reflection of this.

Throughout the 19th and 20th centuries, the majority of Guyana’s established rum distilleries were shut down and in the 1990s, the three remaining distilleries were consolidated into one single production site (the aforementioned DDL Diamond Distillery). But here’s the wonderful thing: many of the historic stills from closed Guyana distilleries, some of which had moved from distillery to distillery over time, had survived. DDL moved these to the Diamond Distillery and continue to use those very heritage stills today (often named after the distilleries, plantations or towns from which they came), to produce their rich and flavourful rums. Examples include the iconic Port Mourant double wooden pot still, Versailles single wooden pot still, Enmore wooden column still and Savalle metal column still - all of which, apparently, are really exciting to rum fans (don’t worry, we too will soon become giddy at the mere mention of these stills…). This meant that the ‘marques’ (the word used for flavour profile in rum) of those stills and former distilleries could be re-created at the Diamond site. As a result, the use of these iconic stills is something that we can very much associate with Demerara or Guyanese rum today.

The use of those heritage stills is really interesting to me, as a whisky drinker, because I can’t name one Scotch whisky distillery where stills that are hundreds of years old are still in operation. So, the fact that these often wooden rum stills are still soldiering on in Guyana and making incredible rum is nothing short of amazing to me. Long may they last!

Demerara rum is usually known for its intense, full-bodied, rich and dark flavours. This is thanks to a combination of production factors and these rums can be found in a variety of guises, colours, strengths and ages. But their common denominator is the richness of flavour from the various celebrated, historic stills of different shapes and forms (please feel free to read all about the plethora of still types - like double-retort pot stills - here, as it offers a much more eloquent explanation than I could attempt!).

One will often find Demerara rum in ‘navy rum’ style blends. Demerara rums are usually quite distinctive, even in a multi-faceted blend, as a result of their earthy, savoury-sweet character. Outside of blends, Demerara rums can be fantastic for bringing intensity to cocktails or as an indulgent sipping rum. So far, apart from the Black Tot Rare Old 40 Years, I’ve tried a few El Dorado expressions (the 8 Year Old and 12 Year Old) which I’ve really enjoyed and have tempted me into exploring more Guyanese rums in the future. Now, every time I drink a Guyanese rum, I’ll think of those impressive stills and their years of dedication to the rum cause.

And that’s all folks! I hope that you now have a better understanding of some of the characteristics and background of Guyanese rum and like me, will appreciate its wonderful flavours even more as a result. Next time, I’ll be looking at another ‘type’ of rum you may be familiar with – spiced rum, so stay tuned for that! Until then, happy rumming. 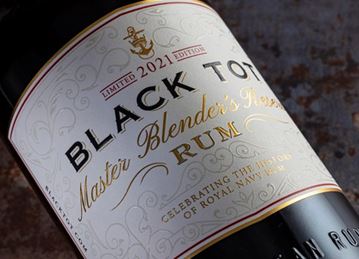